We all have heard of this phrase that God is omnipresent. This phrase applies to modern-day technology as well. Wherever we go, we could find one very important phenomena you all have heard of. I am talking about Force or load. Whatever we do is all related to force. Even while typing, we are putting our finger force on the key of the board that results in a display of that letter on the screen. This phenomenon is vastly applicable for each branch of engineering. Since we are dealing with civil engineering so now we shall be discussing the load or force being acted on building or any infrastructure.

Force is the push or pulls that tends to move or stop the object. Here also one very important term comes into play that is stress. Stress is the force being acted on one particular area. Technically, stress is Force upon the area and Newton per mm square is its SI unit. Every activity happening around the world depends on stress. In simple words, we can say that stress is resistance against any load acting. There are many types of stress. On every object, either single stress is been acted or combined stress is been acted altogether.

There lie many types of stresses which four main types are Tensile stress, compressive stress, shear or torsional stress, and lastly bending stress. Here we shall be knowing about torsional stress.

Torsional stress has evolved from the term known as torque. Torque is the net sum of two forces been acted in opposite directions on the same line parallel to each other which tends to rotate or twist the object. Some of the common examples of torque in every day’s life are:-

From torque, torsion has been derived. One of the same thing but torque is used in a more generalized form while torsion is more into the technical aspect.

T=Torque or moment of torque in Nm.

r= distance between the rotational axis to the farthest point in the section.

l= length of an object over which torque is applied

G= Modulus of rigidity or shear modulus. Simply, we can say that sheer modulus is the ratio of shear stress over shear strain having no unit.

While we have got all the values of the equation, we can easily find out the value of torsion through the above equation. J is the torsional constant which remains the same throughout.

As of now, I am sure you all are been familiar with torsion and equations to calculate it. Now we shall be looking at various cases or conditions under which torsional stresses are been calculated. 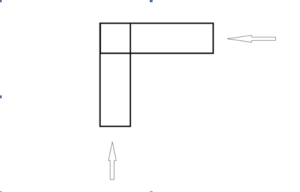 The concentrated load will be at the slanted line at the mid-point at which two different stress is been acted. Thus torsional stress acting might result in collapse or failure of the building due to two irregular loads being acted denoted by the two arrows shown above.

Case 2 for regular building but irregular load being acted- in many cases, suppose a two-story building divided into two blocks above as shown below. 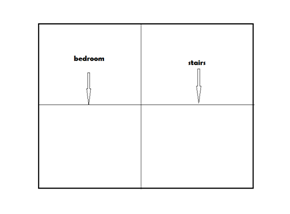 One block has a bedroom while other has the stairs. Since under the condition of load, bedroom will have less load while stair block will have more load. Therefore, the resultant torsional stress will be unbalanced and may fail the building if applied in excess.

Above are the two applications in which torsion is been acted in common form.

Summarising the whole content, in short, torsional stress known as shearing stress is the utmost for every civil engineer who is willing to opt for their career in the designing field. Torsional stress is the stress that is been acted on wide areas of the subject in every aspect of designing. For getting the detail and in-depth knowledge about torsion, a lot of lucrative online platforms are there on online media whose graphic quality is such which catches the eye of the reader at very first glance. But not to get fooled by all that. The civil era has emerged as the perfect Civil Engineering online Courses platform for every civil engineering aspirant which has a structured course enabling everyone to learn at a lesser time. The cost too is minimal. Even free modules are available that you can avail. Even you can go through the blogs having a piece of detailed and interesting information as a whole in the civil era.

Thanks for going through the content. I am sure you all have found it quite interesting and informative. Stay tuned for much more. Till then, opt for civil era online courses for top class courses modules that none of you can regret later.